Illustrated Map of the United Kingdom 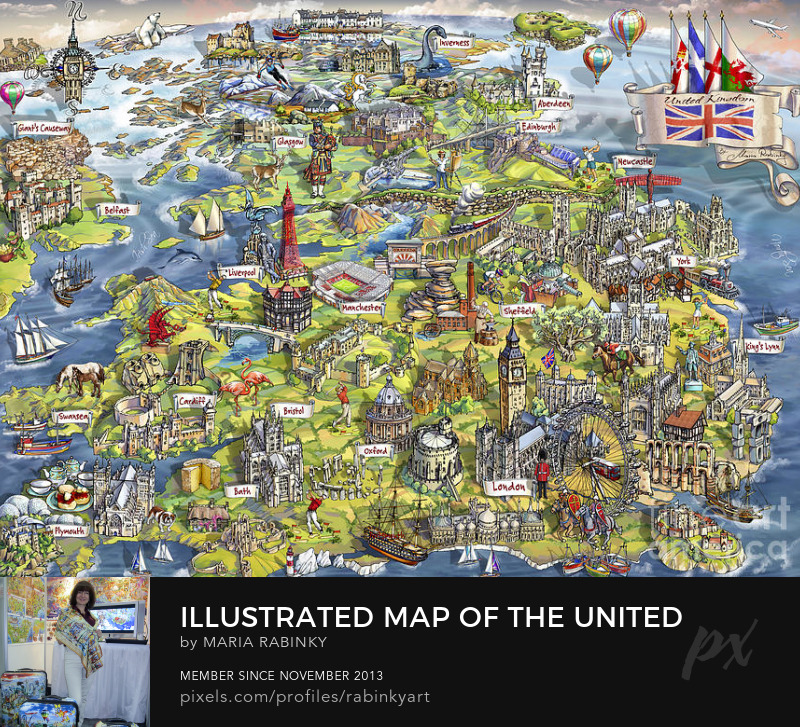 Illustrated Map of the United Kingdom is depicting the most famous landmarks of England, Wales, Scotland, and Northern.

The capitals are London, Edinburgh, Cardiff, and Belfast. The full area of the United Kingdom is approximately 245 square kilometers.

England is the birthplace of Shakespeare and The Beatles. No need to explain who they are! It is home to the capital, London, a globally influential center of finance and culture. England is also the site of Neolithic Stonehenge, Bath’s Roman spa, and centuries-old universities at Oxford and Cambridge.

Britain is famous for the seams with beautiful buildings steeped in history, places of extraordinary natural beauty, and striking ultra-modern structures most of them you can find in this Illustrated Map of the United Kingdom!

Hadrian’s Wall Erected by the Romans in AD 122. This wall was intended to keep the ‘barbarians’ away under the orders of Emperor Hadrian. This substantial stone wall once stretched nearly 80 miles (128km) from coast-to-coast in the north of England.

Stonehenge is rising from the Salisbury Plain, and you’ll always be filled with amazement by them. The most prominent prehistoric monument in old Europe. It was built in the late Neolithic period in around 2500 BC and is now part of a UNESCO World Heritage Site.

White Cliffs of Dover are white chalk- finished cliffs on the Kentish coast are conceivably Britain’s most iconic natural point of interest, known as the gateway to Britain.

There are so many attractions in the Illustrated Map of the United Kingdom like Blackpool Tower in Blackpool; Tower Bridge in London; St Paul’s Cathedral; Edinburgh Castle; Palace of Westminster; Brighton Palace Pier in Brighton; Tower of London; The Needles at the Isle of Wight; Buckingham Palace; Eden Project in Cornwall; Windsor Castle: The Iron Bridge in Shropshire; The Radcliffe Camera in Oxford; The Radcliffe Camera, Oxford; Loch Ness; Angel of the North in Gateshead; Albert Dock in Liverpool; York Minster; Forth Bridge; Durham Cathedral in Durham; Lindisfarne in Northumberland and many more attractions.

The Illustrated Map of the United Kingdom was created for Gibsons puzzle company and had found its fans as BEAUTIFUL BRITAIN 1000 PIECE JIGSAW PUZZLE game.

Because there are so many exclusive details on this map illustration, some people prefer to decorate a whole wall with this image as a wallpaper or printed mural.

Rabinky Art, LLC, is also offering to purchase a print of this Map Illustration of the United Kingdom. Please click here to pick a print size and media.