Glade virtually above the land of America! USA Wonders Map Illustration will help you to fly above the country and see the beauty of historical and architectural landmarks. You will see the major cities, represented by clusters of the most recognizable buildings.

The United States is a country of fifty states covering a vast territory of North America, with Alaska in the northwest and Hawaii islands extending the country boundaries far into the Pacific Ocean. Major Atlantic Coast cities are New York, a global cultural and financial center, and capital Washington, DC. Midwestern city Chicago is famous for its unique architecture, and on the west Pacific coast, Los Angeles – the land of Hollywood, which is famed for filmmaking. All these landmarks presented in this USA Wonders Map Illustration.

American wonders of nature will require a full book of descriptive stories. There are hundreds of national parks, monuments, and historical sites that are visited by millions of people year after year. The list includes an enormous number of the country’s most spectacular and scenic locations, as well as many of its most historic and remarkable points of interest. The most visited national parks are Yellow Stone National Park, Grand Canyon National Park, Sedona Red Rock Ranger District, and many more natural wonders.

The wonders of the US attract a lot of tourists from all over the world. Tourism in the United States is a massive industry. Foreigners visit the US to see natural wonders, cities, historic landmarks, and theme parks. Americans are interested in similar attractions, as well as recreation and vacation areas.

USA Wonders Map Illustration is serving the interests of the tourist industry and can enhance any tourist company brochure. Educational or editorial companies also can benefit from using this illustration.

This US Map Illustration, the vividly illustrated map created by Maria Rabinky, has accumulated admirers and customers from all over the world and caught the attention of leading manufacturers of puzzles in the US and Europe. 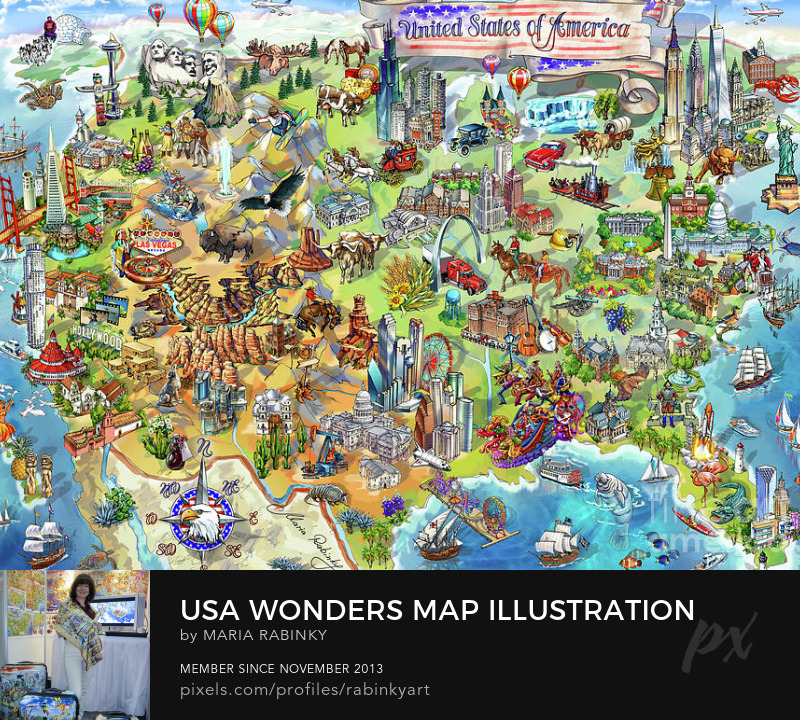